Today, about 30 people gathered in front of the Greek consulate in Munich to express their solidarity with the 300 hunger strikers in Greece. We stayed there for an hour, held speeches, shouted slogans and handed over a statement to the consulate, which they promised to forward to the ministries of citizen protection and interior (read text below). 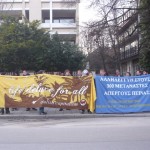 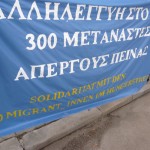 Text of the statement:

We are writing to you on the occasion of the hunger strike of 300 migrants which is currently taking place in Athens and Thessaloníki. We have closely followed the situation of refugees and migrants in Greece over the last years. We are not surprised that – again – migrants feel compelled to choose such a strong measure to campaign for their rights: putting their lives at risk. We express our solidarity with their cause.

With this letter, we want to urge you to fulfill the demands of the hunger striking migrants, i.e. the unconditional legalisation of all migrants in Greece. In our understanding, this constitutes the only permanent and viable solution to the despicable situation of refugees and migrants in Greece, a political issue various Greek governments have struggled with unsuccessfully.

We understand that the current Greek government is lobbying on the European level to get central political mechanisms which have contributed to the current situation removed. The reform of Dublin II and a general overhaul of the European migration and asylum system need to be mentioned here. From our perspective notwithstanding, the Greek government is pursuing this political strategy on the backs of the migrants. Since last August, we observe an increased practise of detention, even though the conditions in administrative detention are in clear violation of various human rights. This has been documented time and again not only by NGOs, but lately also by the European Court of Human Rights in the case MSS vs. Belgium/Greece. At the same time, the situation of migrants in Athens is becoming harder to bear, with increased repression from the police and a rise in fascist, xenophobic violence that seems to go largely unstopped. The latest political developments in Greece, such as the passing of the new Asylum bill as well as the extension of the RABIT deployment by the European border agency Frontex show that the Greek government has opted for a policy of repression that is not suitable to help either the migrants nor the Greek state.

We believe that by following the migrants‘ demands, the Greek government can send powerful political signals. A legalisation would be the strongest communication to the other EU member states that the current system of delegating responsibility to the fringes of Europe cannot continue and needs a courageous solution. A legalisation would also finally end the years of uncertainty migrants have been facing in Greece and attribute them their rights as part of the society that they have long earned by their labour in the Greek economy and the life they have led in Greece. A legalisation would also send a clear political message that it is necessary to deal with the new and (be)coming citizens in a fair, respectful and dignified way and that xenophobia and racism are damnable attitudes that better belong to the past.

The European answer of bordering and exclusion has no future, it only creates pain and violations of rights.